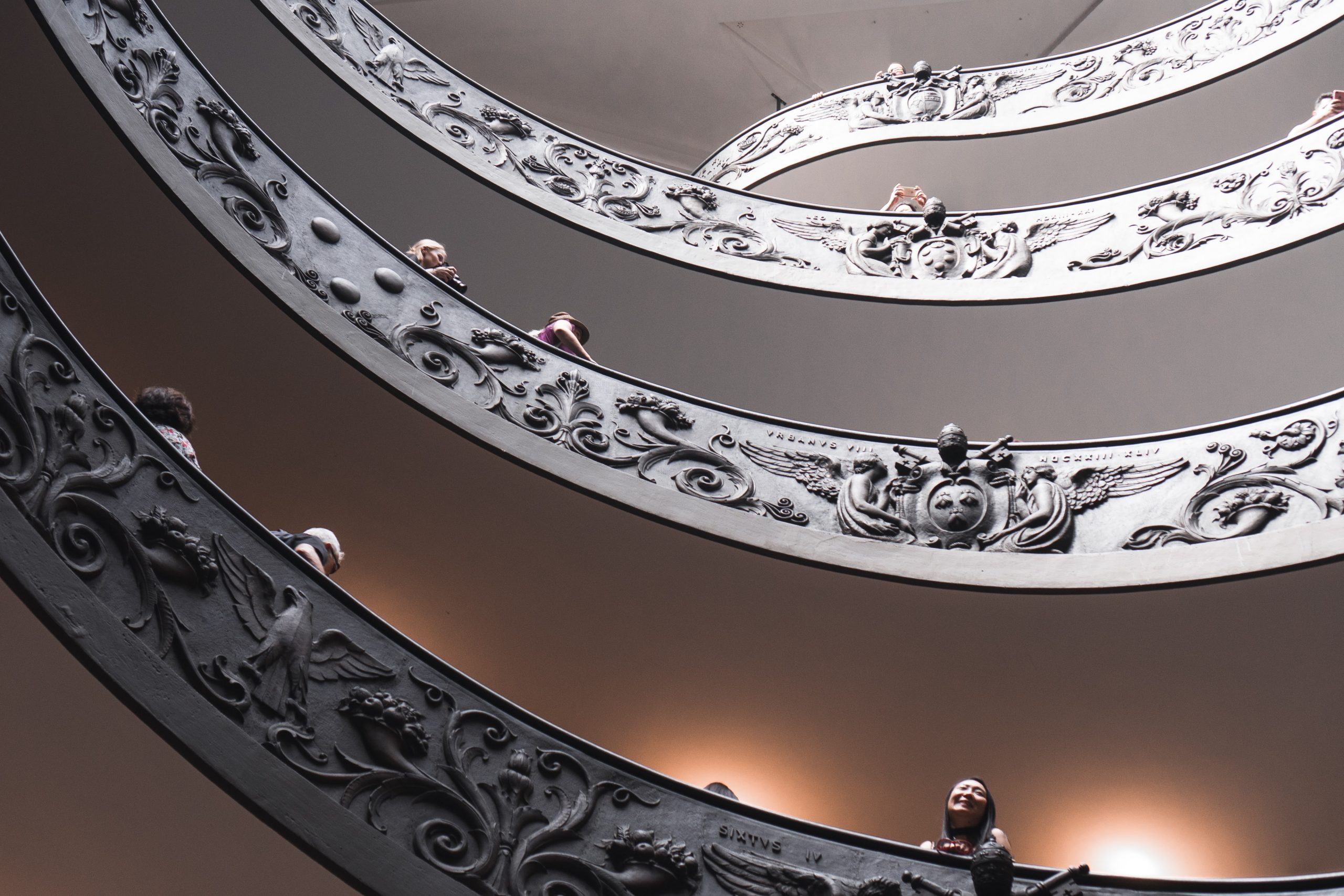 TOP 18 museums in Rome: places that will amaze you + 3 almost unknown gems of the city

Home » TOP 18 museums in Rome: places that will amaze you + 3 almost unknown gems of the city

Rome is a fascinating city with an incredible history and artistic value. It is undoubtedly one of the European cities with the most tourist attractions. It would be almost absurd to visit the capital of Italy without visiting some of the most captivating museums in the city. So buckle up and prepare to be amazed!

The best museums in Rome

Despite the immensity that the Italian city can represent for a visitor who arrives in Rome for the first time, there should be no worries. You can read in this article about the best museums in Rome. All of them are indicated and marked practically throughout the city. So they will be easy to find. Most of them probably already sound familiar to you.

To help you plan your route, download the app Framey.io and enjoy all the top-rated attractions in the city.

1. Archaeological Museum of the Colosseum

With over 7.5 million visitors a year, the Colosseum Archaeological Museum Park in Rome surpasses the world fame of the Vatican Museums. In reality, the two entities are often at the same level, taking turns chasing a record that changes from time to time.

The charm of Ancient Rome, so tangible in the majestic theatre, is a positive physical emotion involving everyone. It is impossible to resist a walk in the arena where once lions roared, and gladiators fought. The Colosseum is a magnificent arena that has made a name for itself for millennia.

The Vatican Museums are the irrefutable testimony of the patronage capacity that the Church had in past times. It is one of the largest art collections in the world, and there is only one word that can define it — whether you like art or not — essential. In its art gallery, you will find masterpieces by artists such as Giotto, Leonardo da Vinci, Raphael, Perugino, and Caravaggio, over 460 works of exceptional quality.

Among these, we can mention some of the most famous works you must see: the Sistine Chapel, St. Peter’s Basilica, The Raphael Rooms, and The Transfiguration by Raphael or Apollo Belvedere. You will also be astonished by The Borgia Apartments and Garden of Eden by Wenzel Peter.

The museum that keeps the most precious asset of Rome, its symbol: is the Capitoline Wolf. It is a work that perfectly captures its essence, as this is the place par excellence of Roman art. The Capitoline Museum is the oldest public museum in the world, having been founded in 1471 by Sixtus IV and accessible to everyone since 1734.

The Capitoline Museums, or Museum of the Roman Empire, in Piazza del Campidoglio, is divided into two buildings: the Palazzo dei Conservatori and the Palazzo Nuovo. The Lapidary Gallery connects the two palaces and allows visitors to move from one building to another without leaving the museum.

In the Palazzo dei Conservatori it is possible to admire various Renaissance frescoes, sculptures by Bernini, the legendary Capitoline Wolf, marble, and ancient bronzes. Palazzo Nuovo mainly collects sculptures, many of which are Roman copies of Greek works. A must-see is the Venus Capitolina which dates back to 100-150 AD., and Mirone’s Discobolus.

The beautiful manor on the Tiber, also called Hadrian’s Mausoleum, which over the years was also the papal residence and prison for centuries, is now a museum that tells the story of the Middle Ages and the era of the popes.

Castel Sant’Angelo is on the right bank of the Tiber, opposite the Pons Aelius and a short distance from the Vatican, between the Borgo and Prati districts. It is also connected to the Vatican State through the fortified corridor called the “passetto”. It is visited by almost 1,200,000 tourists every year.

The National Roman Museum is a stage that preserves works concerning the culture and history of Ancient Rome. This museum has masterpieces of antiquity, making it one of the most important museums in Rome and the world.

The museum is divided into four different locations: Palazzo Massimo, Terme di Diocleziano, Palazzo Altemps, and Crypta Balbi. Each of them hosts sections on a particular theme. In this museum, you can see works dedicated to ancient art, frescoes, mosaics, and sculptures from the Roman era. For this reason, you should visit it.

The museum contains all the historical and cultural aspects of the city of Rome, an archaeological collection that every fan of Rome should see.

Villa Borghese is the third largest park in Rome and one of the city’s main attractions. Inside the Villa are the Museum and the Borghese Gallery, where works of art of inestimable value are exhibited. You can find Bernini’s sculptures “Apollo and Daphne” and “Paolina Borghese” by Canova. You also have to see Raphael’s “Lady with a unicorn”, Botticelli’s “Madonna and Child”, and Caravaggio’s “David with the head of Goliath”.

Inside the park are also two Civic Museums with works of De Chirico and Andy Warhol. You can admire many pieces in the Borghese Gallery in the 20 frescoed rooms. Together with the portico and the entrance hall, the Museum rooms are open to the public.

The grand palace holds a private collection that many tourists worldwide want to visit because of its beauty and uniqueness. Here you can find works by artists who have made the history of art. Among these, you can find Caravaggio, Gian Lorenzo Bernini, Correggio, and Tiziano.

So many pieces are on display, making this building one of the most important in Rome. It would be best to visit Palazzo Doria-Pamphilj because it is the private museum of excellence you can see in Rome. You will be impressed by the Gallery of Mirrors, but not only. Some rooms honestly will give you unique emotions, including the Sala dei Velluti and the Ballroom. The Aldobrandini Hall is a real gem for those who love art and photography.

9. The National Gallery of Modern and Contemporary Art

The National Gallery of Modern and Contemporary Art in Rome contains the most significant Italian collection of contemporary art. A few steps from the Villa Borghese Park, this museum is worth a visit, even for those who are not lovers of the genre. Walking through the rooms of this gallery, you will have an overview of art and artists, Italian and foreign, from the 1800s to the present day.

ETRU is the Etruscan National Museum housed in two Renaissance villas, Villa Giulia and Villa Poniatowski, surrounded by greenery. In Renaissance style, Villa Giulia was built by Pope Julius III between 1550 and 1555. It boasts an architectural garden, nymphaeum, and fountains.

The construction is the work of prestigious artists like Bartolomeo Ammannati, Giorgio Vasari, and Michelangelo Buonarroti. You can admire the rooms containing frescoes depicting the Seven Hills of Rome.

In addition, the finds of the necropolis and ancient Etruscan jewels are preserved at Villa Giulia. Then there is the Tempio di Alatri, a reproduction of an Etruscan-Italic temple from the III-II century BC. Villa Poniatowski is the second seat of the ETRU, and its rooms contain finds from Latium Vetus and Umbria.

There are at least twenty free museums in Rome all year round. Some are open regularly; others can only visit by appointment; many, as we shall see, also offer free guided tours.  There is certainly a lot to see and discover, and it is worth visiting them. We choose 5 of the most interesting free entrance museum in Rome:

The Pantheon is one of the world’s most famous monuments of the Roman Empire and probably the one that has been best preserved over the years. Its first construction dates back to 27 B.C. Marco Vipsanio Agrippa, a Roman politician friend of the emperor Augustus, decided to build a temple dedicated to all the gods. The emperor Hadrian radically rebuilt this building between 118 and 125 AD.

From the end of the fifteenth century until 1878, the Accademia carried out a teaching function in Rome in the arts of drawing, painting, sculpture, and architecture. Today, it preserves and exhibits the heritage accumulated over four centuries of activity.

Hendrik Christian Andersen was a Norwegian painter and sculptor born in 1872 who moved to the United States as a child and then naturalized Italian. The building was designed by Andersen himself, providing a space for the exhibition of the completed works. You can visit both areas and house Andersen’s monumental sculptures and pictorial and graphic work of about 700 pieces.

Located inside the Porta S. Sebastiano of the Aurelian walls, the Museum of the Walls was built in 1990. It offers visitors an educational itinerary that traces the history of the city’s fortifications, from the royal and republican age to those of Aureliano of the III. century, until the interventions of the nineteenth century.

The house museum of the early twentieth century, belonging to the Boncompagni Ludovisi family, was intended as a center for promoting and documenting decorative arts, fashion and costume. You can find here a lot about the evolution of social taste in the modern period. Furniture, furnishings, clothes, and fashion accessories trace the path of the search for decoration and comfort in Italian society, especially in the twentieth century.

Lesser known museums that you must see in Rome

If you have already checked all the newsworthy museums in Rome, you should consider visiting three of the most intriguing museums in the city.

16. The Laboratory Museum of the Mind

In Rome, there is a bizarre museum. You have probably never heard of it, but it is located in Piazza di Santa Maria della Pietà. Opened in 2000, the museum wants to raise awareness of the health/disease paradigm. The Laboratory Museum of the Mind seeks to document the history of asylums and reflect on otherness, social inclusion, care policy, cultures, and the community’s involvement.

In the former asylum in Rome of Santa Maria della Pietà, the exhibition then becomes immersive for the viewer, interactive, and multimedia. It involves the visitor who experiences a continuous oscillation between real and purely virtual elements. The public actively participates in the staging, in what they see, touching firsthand and closely a circumstance that today is fortunately far from us.

17. The Historical Museum of the Fire Brigade

The Historical Museum of the Fire Brigade (Via Marmorata 15) is also worth a visit. It certainly could not be missing in Rome, which has a significant connection with the fire, given the historical past linked to the emperor Nero. It is no coincidence that on display, in addition to materials illustrating the history of the fire service, historical reconstructions that show historical fires, such as the one by Nero or the more recent events relating to the bombings of ’43.

The Burcardo Theatre Museum collects costumes and stage accessories, puppets and marionettes, sets and everything related to the history of the theatre. The museum takes its name from the building that houses it, located near Largo di Torre Argentina. The materials collected in it are mostly part of the private collection of Luigi Rasi, an actor himself, passionate about theatre history and for many years director of the School of Acting in Florence.

In Rome, you stumble upon a piece of history or a work of art at every corner. The city is a real open-air museum; walk through the city’s historical center to admire archaeological finds, excavations, landmark buildings, statues, fountains, and many masterpieces. Get in love with the Italian spirit even before you travel there and read about Rome’s history, culture, tourism and more interesting facts.