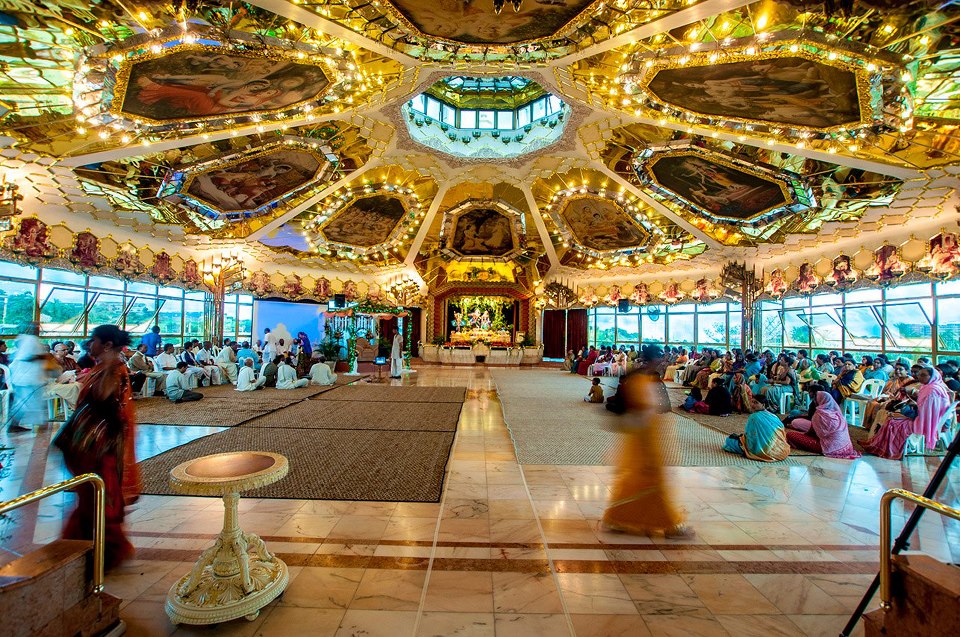 By Mirela ZotaJanuary 16, 2023No Comments

South Africa is well-known for its beautiful landscapes, vibrant culture, and its many attractions. But did you know that this amazing country also has many temples that you may not have heard of? From ancient Hindu temples to modern Buddhist temples, South Africa has a wealth of places of worship that are worth a visit. Here are 10 surprising temples in South Africa you didn’t know existed. 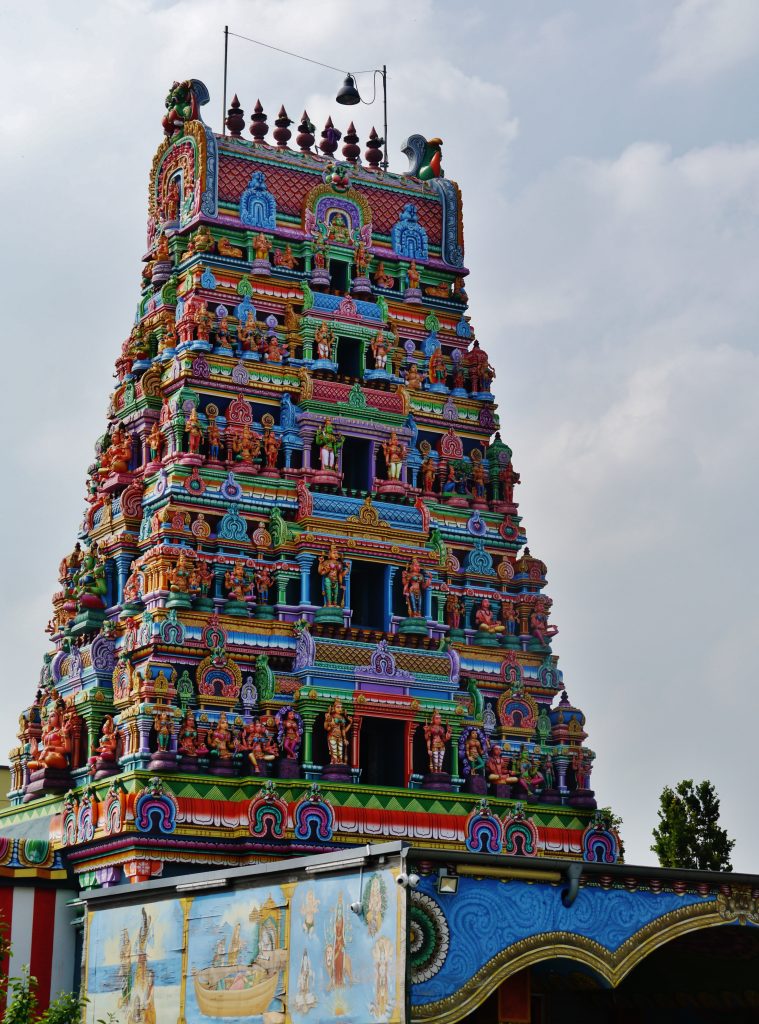 The Mariamman Temple in Pretoria is a spectacular sight that will take your breath away. Built-in the early 1900s by Indian immigrants, the temple stands proudly at the heart of the Asiatic Bazaar and celebrates South African Hindu culture.

As you approach the entrance, you are struck by the vibrant colors and intricate details of the architecture. The large archway welcomes visitors to this sacred space and the towering, multistory building adorned with Hindu gods and goddesses. Inside, visitors will find an array of colorful murals, mosaics, and sculptures depicting stories from the Hindu scriptures.

The main focus of this temple is the goddess Mariamman, who is believed to have the power to cure diseases and protect her worshippers from harm. People from all over South Africa come to pay their respects and make offerings to Mariamman at this ancient temple.

The Mariamman Temple in Pretoria is a beautiful place to experience South African Hindu culture. Its stunning architecture, captivating artwork, and warm atmosphere make it a must-see destination for anyone visiting the city. 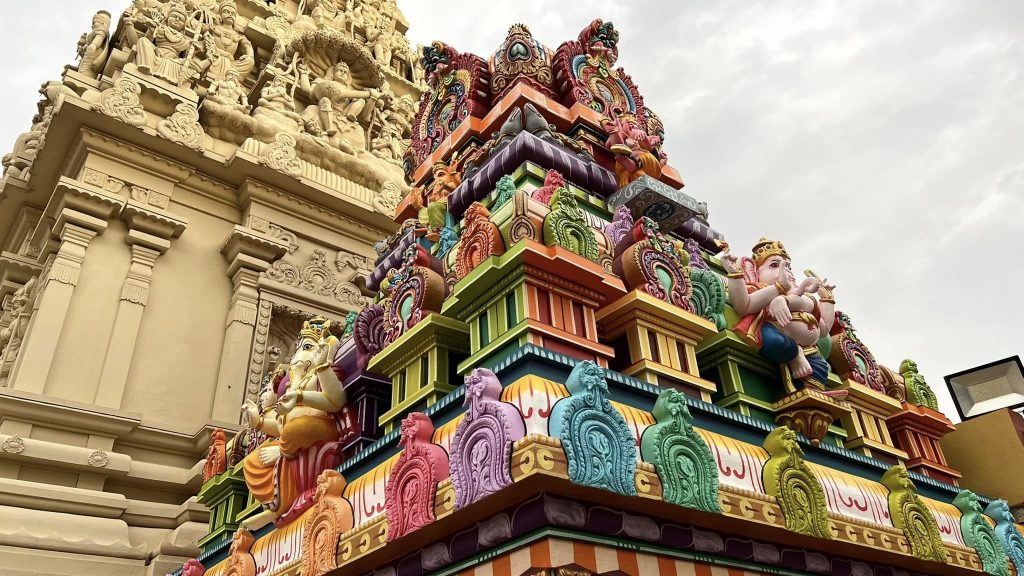 The Madhya Kailash Temple in Midrand is one of the most important temples in South Africa. Located on Stag Road in Glen Austin AH, the temple is dedicated to Lord Shiva and his consort Parvati. The temple has a rich history, with many devotees coming from all over the country to pay their respects.

The temple complex houses some deities, including Lord Ganesha, Lord Murugan, Lord Vishnu, and Goddess Durga. Visitors can explore the grounds to take in the beautiful architecture, from the sculptures adorning the walls to the tall spires of the temple that reach up into the sky.

The highlight of the temple is the iconic Nandi statue, which is said to represent Lord Shiva’s vehicle. This sculpture is particularly unique as it features a unique blend of Hindu and African influences. The colorful murals and intricate carvings make this temple truly spectacular.

Visitors are welcome to attend the morning and evening Aarti prayers that take place every day. There are also special events held throughout the year, such as Diwali and Janmashtami celebrations. On these occasions, the temple complex is beautifully illuminated and adorned with flowers.

If you’re looking for an authentic experience of South Africa’s spiritual heritage, then Madhya Kailash Temple in Midrand is definitely worth a visit. 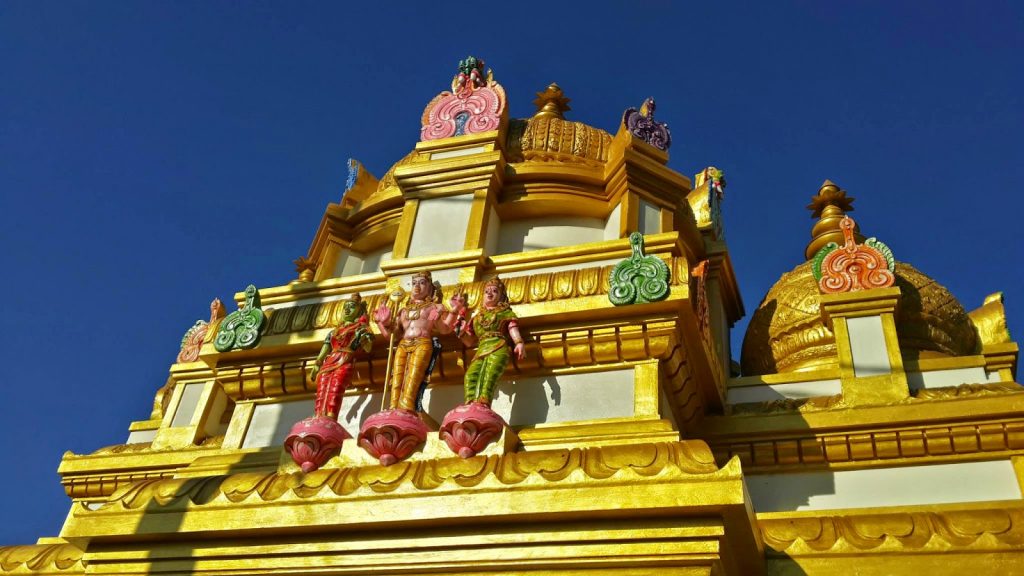 The Clairwood Shree Siva Soobramoniar Temple is a Hindu temple located in Clairwood, Durban, South Africa. The temple was established in 1968 and is dedicated to the worship of Lord Shiva.

The temple has become a popular pilgrimage destination for Hindus from all over South Africa. It features a beautiful entrance gate and grounds with lush gardens that are reminiscent of an ancient Indian palace. Inside the temple, there are multiple shrines for worship, as well as a large open area for prayer.

The temple celebrates many festivals throughout the year, including Shivarathri, Diwali, and Krishna Janmashtami. During these celebrations, the entire temple is decorated with lights and flowers, and various traditional music and dances are performed.

The Clairwood Shree Siva Soobramoniar Temple also offers free yoga classes and meditation classes regularly. These classes are open to everyone, regardless of background or religion. Additionally, the temple has a library filled with books on Hindu scriptures, philosophy, and history.

Whether you’re a Hindu or someone looking to learn more about Hinduism, the Clairwood Shree Siva Soobramoniar Temple is a great place to visit and explore. From its beautiful architecture to its spiritual atmosphere, this temple is sure to provide an unforgettable experience.

The International Society for Krishna Consciousness (ISKCON) Cultural Center in Pietermaritzburg is a popular destination for Hindus from across the world. This center is dedicated to Lord Krishna, who is considered an avatar of the Hindu god Vishnu. Here, visitors can explore the teachings of ancient Indian philosophy and learn more about the Vedic culture. The temple also hosts various events throughout the year such as seminars, workshops, and spiritual festivals.

The ISKCON Cultural Center features some stunning architectural designs, including a beautiful entrance arch that stands tall above the entrance gate. Inside, visitors can enjoy a mesmerizing view of the temple grounds, adorned with lush gardens and colorful statues of Hindu gods and goddesses. The center also offers daily puja ceremonies and Aarti (ritualistic prayers). Visitors can also take part in cultural activities such as kirtan, storytelling, and devotional singing.

The ISKCON Cultural Center is a place where all Hindus can come together to celebrate their faith and traditions. With its peaceful atmosphere and friendly environment, it’s no wonder this is one of the most popular temples in South Africa. So if you’re looking for a spiritual sanctuary to spend your day, then this temple is worth a visit. 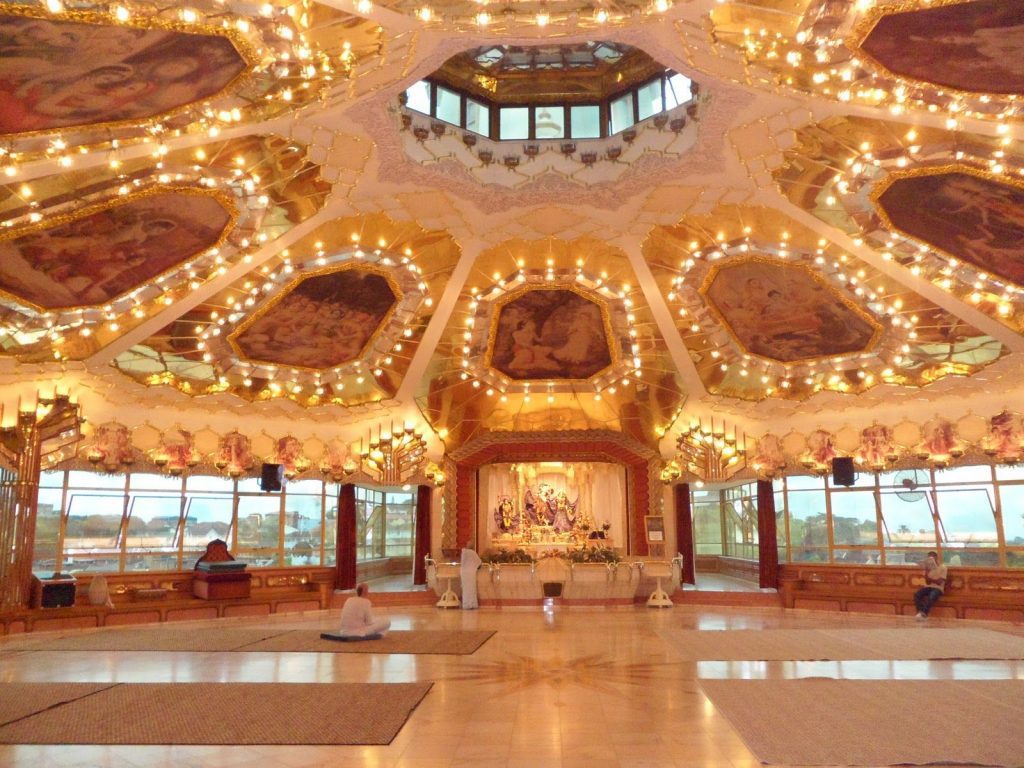 The Hare Krishna Temple, located in Chatsworth, South Africa, is a beautiful example of a traditional Hindu temple. Founded in the late 1960s, it’s one of the oldest temples of its kind in the country. The temple is devoted to Sri Caitanya Mahaprabhu, an incarnation of the Supreme Lord Krishna and his beloved companion, Sri Radha.

The temple has numerous shrines to many of the different Hindu gods, including Lord Vishnu and Lord Shiva. Visitors can also observe several traditional Hindu rituals being performed on the premises. The temple offers various prayer services and workshops, as well as guided tours for those who wish to learn more about Hinduism.

The atmosphere at Hare Krishna Temple is peaceful and inviting. There’s an air of serenity that envelopes visitors as soon as they enter the premises. Not only is the temple aesthetically pleasing but it’s also a great place to relax and connect with yourself spiritually.

Visitors should note that the temple operates strictly according to the principles of Vaishnavism and no other religious activities are allowed on the premises. However, there are plenty of other activities to enjoy around the area, such as shopping, dining, and sightseeing. So if you’re ever in the vicinity, be sure to check out this beautiful temple! 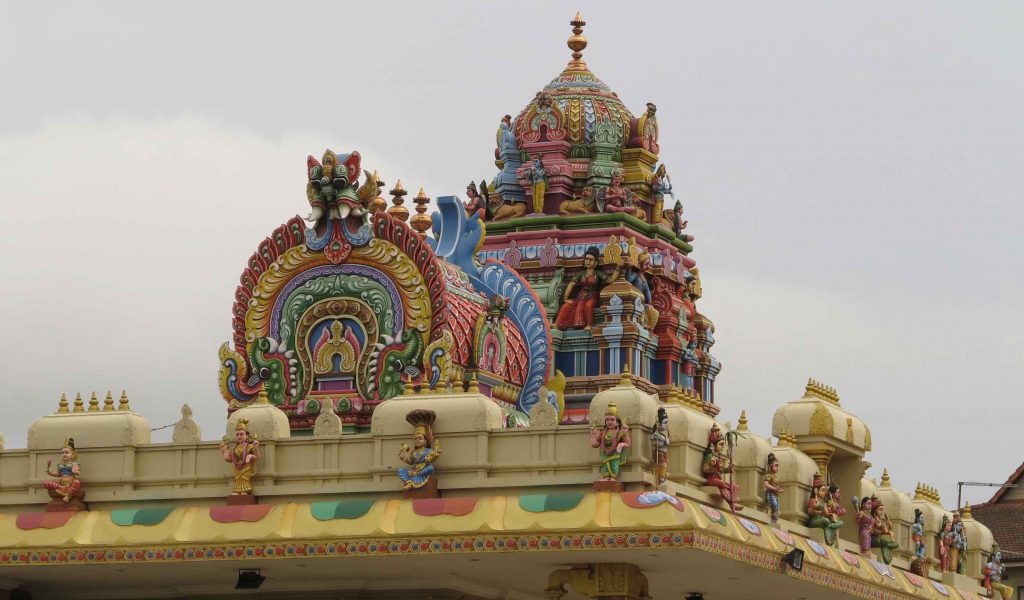 The Durban Hindu Temple is an important spiritual and cultural center for the Hindu community in Durban, South Africa. It was built in 1965 and is managed by the Hindu Community of Durban.

The temple houses three major shrines dedicated to the Hindu gods Shiva, Vishnu, and Hanuman. Visitors to the temple can take part in daily rituals such as chanting prayers and offering their respects to the deities. The temple is also home to numerous religious festivals throughout the year.

The exterior of the temple is decorated with numerous colorful statues of various Hindu gods and goddesses. The interiors are intricately designed with vibrant frescoes and carvings, making it a stunning sight to behold.

The Durban Hindu Temple is open daily from morning until late in the evening, and visitors can attend any of the daily ceremonies or prayer sessions. It is an ideal spot to experience the richness of Hindu culture and religion. 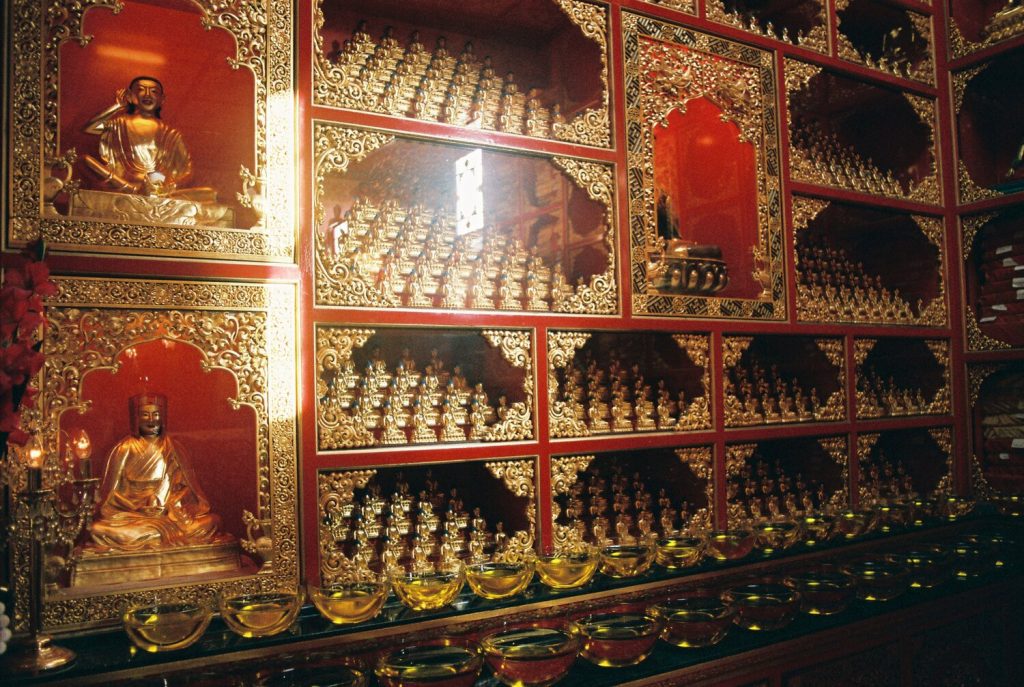 Kagyu Samye Dzong, located in the Kenilworth suburb of Cape Town, is a Tibetan Buddhist center and temple. Founded by Tibetan lamas in 1995, the center provides teachings, courses, and practices in Buddhism as well as meditation retreats, workshops, and special events.

The temple is devoted to the practice of Tantric Buddhism, which is derived from the teachings of Padmasambhava, an Indian saint who is said to have arrived in Tibet in 817 AD. The temple consists of three buildings – an indoor shrine, a library, and a bookshop.

The shrine contains a statue of Padmasambhava and other religious objects including thangkas (painted or embroidered images depicting Buddhist deities), stupas (structures built to contain relics), and thanka banners. The library houses over 300 volumes on Buddhism and related topics such as philosophy, meditation, and psychotherapy.

The Kagyu Samye Dzong has been visited by many prominent people including HH Dalai Lama, who delivered teachings there in 1999. With its beautiful architecture and peaceful atmosphere, the temple is an important spiritual site for those interested in exploring Buddhism. 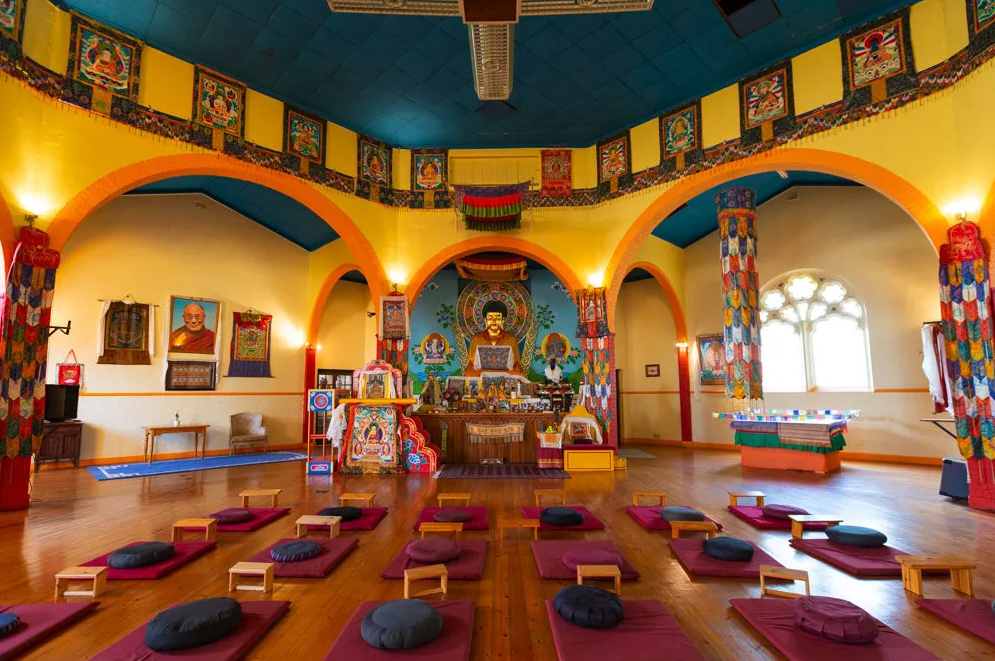 The Lam Rim Buddhist Center is located in Johannesburg, South Africa, and is one of the most renowned centers for Buddhism in the area. It is dedicated to the practice and promotion of Lam Rim, which is a form of Tibetan Buddhism that emphasizes the importance of meditation, compassion, and awareness. The center also provides education, resources, and support to those seeking to learn more about the Lam Rim teachings.

At the Lam Rim Buddhist Center, visitors can take part in a variety of activities including meditation classes, retreats, and special ceremonies. There are also talks and seminars held regularly which provide an opportunity to explore Buddhist teachings in more depth. The center also hosts some festivals throughout the year, celebrating important days in the Buddhist calendar such as Buddha’s birthday and enlightenment.

The Lam Rim Buddhist Center offers an atmosphere of peace and tranquility where visitors can relax and find inner peace. Visitors are welcome to explore the center’s many resources and learn more about the Lam Rim teachings. The center also offers a shop that sells items related to Buddhism, including books, artifacts, and apparel. 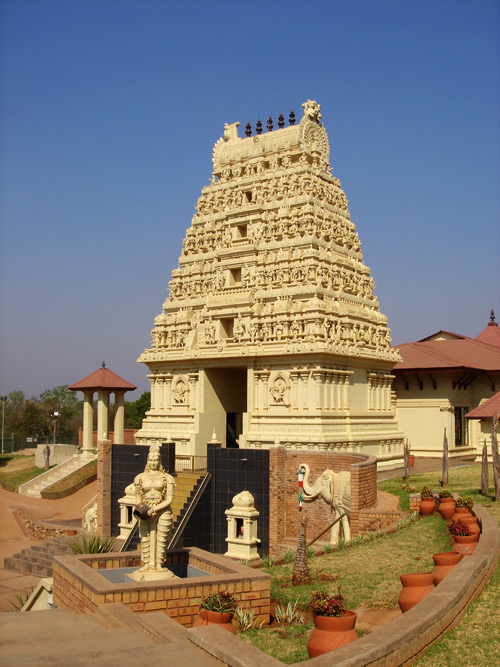 Nestled in the city of Centurion, South Africa, is the beautiful Shree Ayyappa Kshetram temple. This ancient temple was constructed in 1995 and is a popular Hindu pilgrimage site for devotees who come to seek blessing from the presiding deity Lord Ayyappa. The temple is home to many traditional Hindu rituals and festivals, such as Pongal, Maha Shivratri, Hanuman Jayanthi, and Ayyappa Mandala Pooja.

The temple also houses an array of statues of Hindu Gods and Goddesses including Lord Ayyappa, Lord Shiva, Goddess Parvati, Lord Ganesha, Lord Subramaniam, and other Gods and Goddesses. These statues were brought over from India and are intricately carved with exquisite detail. The temple also has a divine garden with a pond and a large prayer hall that can seat over 400 people.

The temple is an important center of spiritual enlightenment, offering courses and seminars on Vedanta philosophy and meditation. On festival days and special occasions, thousands of pilgrims flock to the temple to participate in prayers and festivities. Whether you are a devotee or simply curious about this grand temple, it is a wonderful destination to visit. 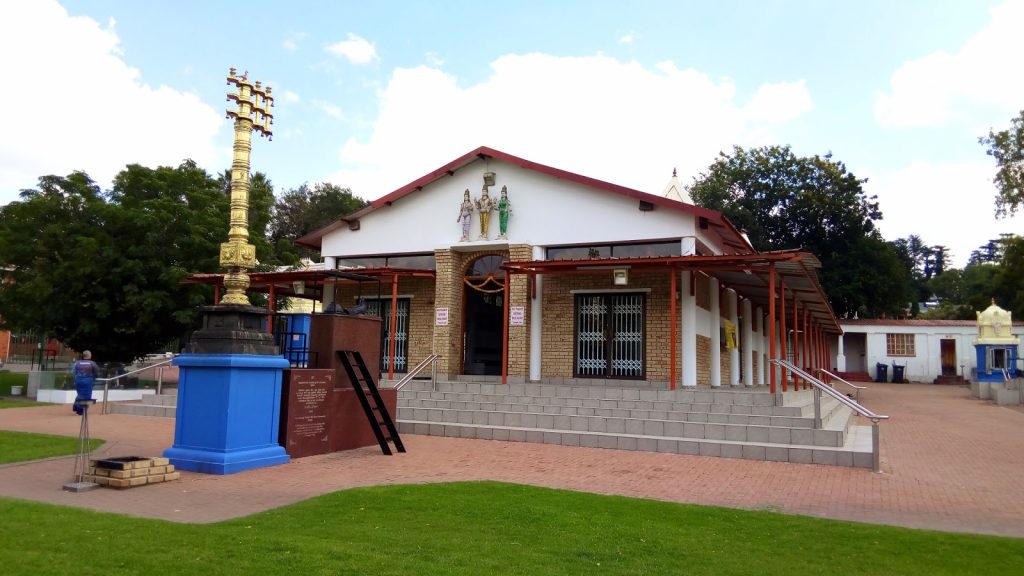 The Melrose Temple is one of the most awe-inspiring temples in South Africa. Located in Johannesburg, this temple was built by the Indian community of South Africa and is considered to be an important spiritual site for Hindu worship.

The exterior of the temple is constructed of white marble with colorful frescoes and intricate carvings that make it a sight to behold. The entrance to the temple features two large elephant sculptures, which are said to represent strength and protection. Inside, there are various shrines dedicated to Hindu deities such as Ganesha, Shiva, and Vishnu, as well as statues and paintings depicting stories from Hindu mythology.

Aside from being a place of worship, the Melrose Temple also serves as an educational center where visitors can learn more about the religion, culture, and history of South Africa. There are regular classes held at the temple and visitors can also partake in guided tours to gain further insight into the spiritual life of South Africa.

Whether you’re a devoted follower of Hinduism or simply looking to explore one of South Africa’s most sacred sites, the Melrose Temple is an unforgettable experience.

Are you ready to explore the religious heritage of the country? Plan your vacation, install Framey App, and have a holiday experience like never before!

Check also other Temples articles on our blog